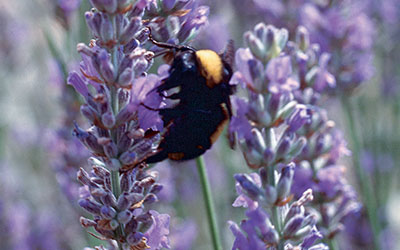 The genus Lavandula is a favorite group of ornamental herbs native to southern Europe and the Mediterranean. These are sun-loving plants that thrive in hot weather and grow well in the West in a wide range of soils, even compost-enriched garden loams, as long as they are well drained. Heavy, poorly drained clay soils can be fatal to lavenders.

In spring, before the plants begin to show signs of new growth, cut back the old stems by one-third to

The two major groups of Lavenders include the English Lavenders (L. angustifolia varieties) and the Lavandins (L. x intermedia varieties), which are hybrids between English lavender and another species, Lavandula latifolia. Generally speaking, the English lavenders have the deepest flower color, while the Lavandins are taller plants with larger flowers and longer flower stems.

The English lavenders are often preferred as a source of dried flowers while the Lavandins are typically used for oil production, potpourris and lavender wands.