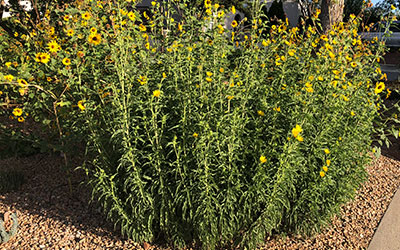 Maximilian Sunflower produces one of the most spectacular late-season bursts of color. The tall flowering spikes, up to 20 or 30 in a mature clump, are covered with up to 30 or more yellow, closely spaced daisies. Place Helianthus against walls or fences or make a hedge with  it, but don’t put it in the middle of your most fertile flower beds, as it will crowd out weaker neighbors. The more water it receives, the taller it gets. (Growing Tip: put it in a tomato cage early in the season and let the tall stems grow up through it so they don’t flop over with the weight of their flowers later in the fall.)