Xeriscape not Zeroscape: Water-conscious landscaping can be luscious and beautiful. 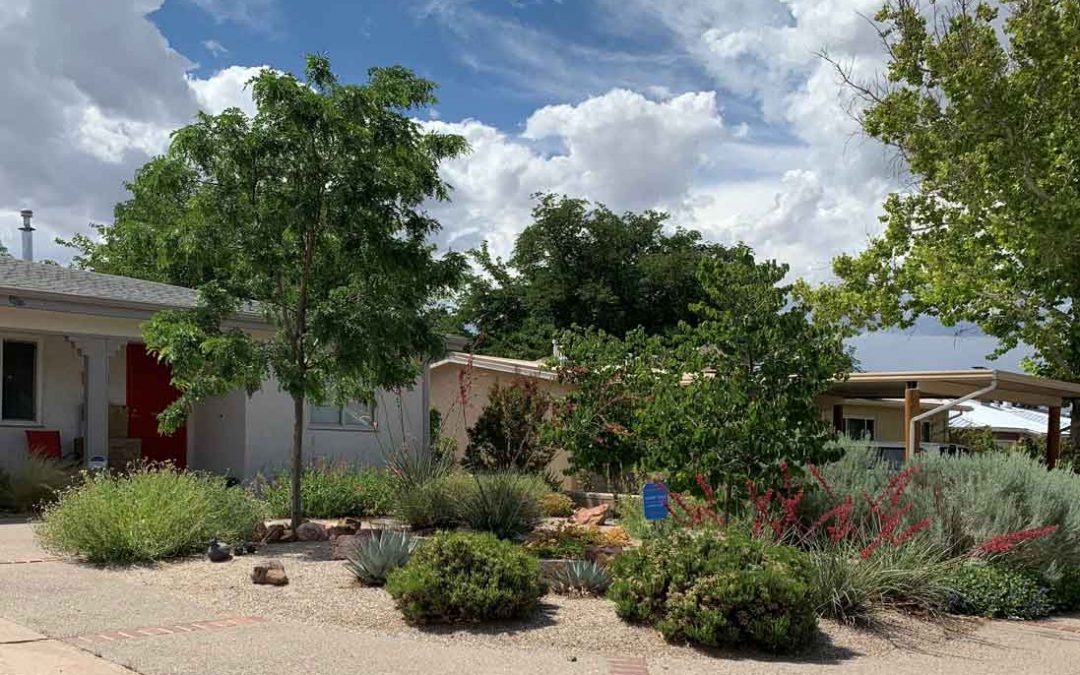 ALBUQUERQUE, N.M. — By and large, New Mexican homeowners are getting the all-important message of the arid Southwest: Water is precious, and not to be wasted.

But local experts say an important piece of the story is still often lost when it comes to landscaping: Conserving water doesn’t have to mean a yard consisting of one plant surrounded by gravel.

“We’ve got to go away from that,” said Carlos Bustos, water conservation program manager for the Albuquerque Bernalillo County Water Utility Authority. “Xeriscapes are luscious, they’re beautiful, they’re abundant, they’re resilient, they’re sustainable. … We hope that 10 years from now we’re not still dealing with the idea of ‘zeroscapes.’”

“I am a big believer that we all deserve aesthetic and beauty,” she said. “When you combine aesthetic and beauty to achieve something else, like passive cooling or low-consumption plants or an invitation to be outdoors, better use of … energy indoors, that’s the main thing.”

According to Jill Brown, a landscape architect and owner of My Landscape Coach, selecting plants tends to be a point in the landscaping process where homeowners get very engaged.

“If I go back and look at the most popular articles, the most popular things, discussions, questions that we’ve received, it’s always about plants,” said Brown, who also provides content for the water utility authority’s landscape website 505 Outside. “So people are really interested in plants and learning about plants and in that aspect of a landscape.”

Bustos said if a tree is well planned and well-positioned, those energy savings can be significant.

“There’s studies out there that say that if you place a tree strategically where you need to, you can save up to 25% of the energy in a typical household use,” he said, adding that tree shade helps reduce water lost by other plants nearby.

“By creating this microclimate, you can reduce the water need between 6 and 20%,” he said. “It’s always cooler in the shade.”

“I always say planting a tree is an act of … citizenship,” she said. “Because you plant that tree today and in maybe 50 years, it’s … a heritage for the neighborhood.”

With trees as well as with smaller plants, Serquis said she’s looking for ways to passively cool living spaces – both indoors and outdoors – and selects varieties that have low water consumption.

When it comes to choosing specific plant varieties, Brown’s got a simple approach.

Of course, there’s a caveat: Those plants and trees still have to be watered properly.

Brown said data and her own experience suggest that in the universe of homeowners who care about their landscaping, about half use an irrigation system of some kind, and about half are hand-watering.

Those hand-waterers, according to Brown and Bustos, should think about installing an irrigation system.

“Hand-watering is wasteful, because they’re spraying the leaves and … we need to get to the roots,” Brown said.

Those who already have an irrigation system can consider whether it’s efficient or fine-tuned enough.

Those who use spray sprinklers, for example, may consider swapping out sprayers for highly efficient models that are more available to homeowners today than in the past, often on the shelf of local irrigation supply companies, Brown said.

Homeowners can look at whether plants in their yard are being watered to the right depth, whether their irrigation system adjusts with the seasons – less water during the spring and fall than in summer – or with the weather.

Plants’ water needs also vary depending in what type of soil they’re planted – which even in the Albuquerque metro area can range widely, from sand on the West Side to clay in the valley.

Serquis said when she first moved to New Mexico from Argentina, the trend was incentivizing homeowners to get rid of their lawns altogether in favor of gravel. But lawns don’t get quite such a bad rap with conservation-minded landscapers these days.

“I think there is something in between” lawn and gravel, Serquis said. “(It) depends how you look at the grass, or what type of grass – it’s not that bad. And a xeriscape with no plants, just as a reflecting surface, could be even worse” because of the heat generated.

Brown said there are types of grass that require less water – and even if homeowners want the grass “that’s at the park,” there are better ways to water it than with a spray system that throws water high in the air and risks evaporation. Bustos agreed.

“If you have a lawn and you’re enjoying it and it’s functional and you’re taking care of it, then update it,” he said. “You know, update that irrigation system. There’s technology out there that just can make things a lot more efficient.”

Brown said mulch is an important part of landscaping in the Southwest.

“One of the biggest things people complain about are weeds in New Mexico, and a lot of that is because wherever there is bare dirt, you’re going to get weeds,” she said. “… The simplest solution and the most inexpensive solution and easy to install is 3 to 4 inches of a shredded wood chip mulch over the entire yard.”

Mulch helps soil hold in moisture and insulate plant roots, and it breaks down over time to enrich the soil. Brown said a mulch layer often means replacing expanses of gravel.

“All gravel does is produce more heat and more weeds,” she said. “Even if you have the weed cloth, the weed cloth just makes it easier to pull the weeds.”

Bustos acknowledged the process of adapting a landscape can be daunting. He said he encourages residents to start with the “lowest investment,” which is changing behaviors. People can start following the seasonal irrigation needs of their landscape, rather than giving the same amount of water all year.

Those ready to invest some resources can take small steps like installing smart irrigation controllers, swapping out sprinkler heads and efficient nozzles – steps Bustos said can save up to 30% of water usage in some cases.

“If you really want to invest, you want to transform your yard into a desert-friendly landscape, then we got a xeriscape rebate that folks can tap into,” he said.

Brown said while her clients may be in different phases with their landscapes, they tend to share one thing in common. “Overall, in general, people in Albuquerque want to save water,” she said. “That is a no-brainer now.”